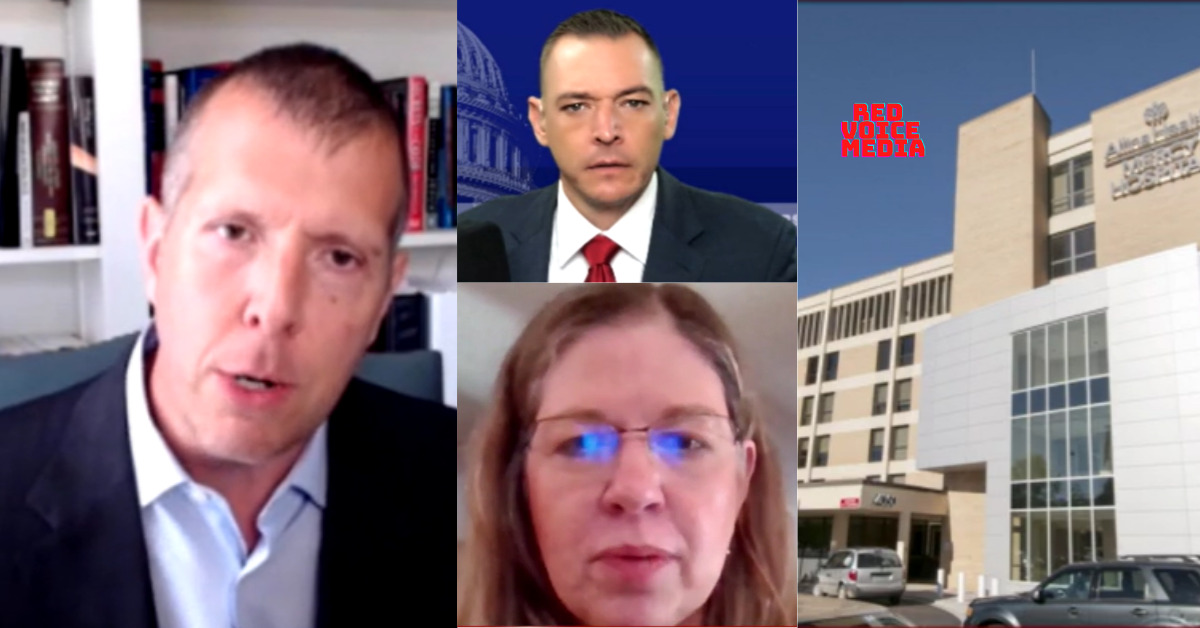 COON RAPIDS, MN – This week, the Stew Peters Show brought information on an attempted medical murder by Mercy Hospital in Minnesota. Now, we have an update on the situation, and there is a pending court hearing to determine whether Scott will be given the chance to survive.

Scott Quiner is a patient at Mercy, and his wife, Anne, is trying to save his life while the hospital effectively kills him. That may sound melodramatic, but it’s very real. Mercy hospital placed Scott on a ventilator per their COVID-19 protocol, and administered drugs to keep him sedated.

The hospital, as we’ve been hearing nationwide, is refusing to administer drugs that Anne has requested, such as, but not limited to, Ivermectin, even though a doctor from another hospital wrote him prescriptions. They’re also refusing to let Anne sign an Against Medical Advice (AMA) discharge form to let Scott leave and transfer care to other doctors who will do what it takes to keep Scott alive. Mercy allegedly has not been giving Scott the much needed vitamins and nutrition his body needs to help fight the virus, as Anne has asked them to do.

Anne shared with Stew recorded phone calls with multiple doctors who had seen Scott telling her that his lungs were “destroyed” from the Covid pneumonia. One doctor, Dr. Linda Soucie, had the nerve to say to Anne, “If we could turn back time and he had gotten vaccinated…” Rightly so, Anne shut her down before the doctor could even finish her sentence.

Scott’s other organs are all working perfectly- his heart, his kidneys, even his brain scan came back normal, Anne said.

The hospital reportedly received over 300,000 phone calls on Wednesday, January 12, after Stew brought this story to light, asking them to give Scott the care Anne is requesting, or release him so she can get the care for him elsewhere. This reporter called as well, and the person who answered the phone (she refused to tell me her name) hung up on me- twice. The hospital reported the calls to the Anoka County Sheriff’s Office, saying they were being harassed.

At midnight Thursday morning, Mercy Hospital retained a well-known attorney in the area, Fredrikson & Byron, to fight the restraining order that Anne’s attorney, Marjorie Holsten, has submitted to restrict Mercy from taking Scott off the ventilator and effectively allowing him to die. Originally, the hospital asked Anne to sign papers releasing the hospital from liability and agreeing to place her husband in a comfort care unit. Obviously, Anne refused, but the hospital decided to move forward with it anyway.

The Quiners with Thomas Renz, who has been working to fight the narrative that Covid shots are completely safe and effective. Renz was able to get an emergency court hearing, and the hospital is not allowed to effectively kill Scott until at least February 11, when the hearing is set to take place.

Fredrikson & Byron called Renz to let him know they would be fighting the restraining order. Just to clarify, this firm (and the hospital) are fighting an order that restricts them from killing Scott by not treating him. Further, the firm is attempting to help the hospital keep Scott in their custody, denying Anne’s request to transfer him to a hospital in Texas that has agreed to care for him (properly).

How is Anne to trust Scott to Mercy’s care when they were set to kill him this very day? What’s more, if they don’t want to actually treat him, why does Mercy want Scott to stay put? Of course, there is financial motivation, but they can’t come right out and say that.

When Anoka County Sheriff James Stuart called Anne to discuss the “harassment” that poor Mercy hospital has been forced to endure on behalf of Scott, she happened to be on the phone with Renz. So, they had a three-way phone call. At the direction of Renz, Sheriff Stuart is opening a criminal investigation into Mercy hospital for medical assault, abuse, and attempted murder.

“We are literally asking [Stew’s audience] to help us save a life,” said Renz. “We are combining what we can do in the courts with what you, the people, can do. You have the power.” Renz continued that every single person should still be calling the hospital as well as state representatives. He said that the attorney general (Keith Ellison) should be working on a murder case, and the governor (Tim Walz) should “get off his butt” and help in this situation.

“They are intentionally ignoring the fact that there are effective treatments,” he continued. “Take Ivermectin out of the picture. There are treatments…there are studies done by experts. [They’re letting people die]…This time we have an opportunity to save someone, and it’s only gonna happen if We The People step up.”

Even so, the local media is still refusing to report on the situation. Stew spoke with some of them, who said that since they haven’t been able to get ahold of Anne, they’ll just speak with the hospital and report with what they’re saying. Meaning, the locals won’t even get a clear picture of what’s going on unless they tune in to the Stew Peters Show.

If we don’t take a stand against these ‘death camp hospitals,’” Renz said, “God help us all.”