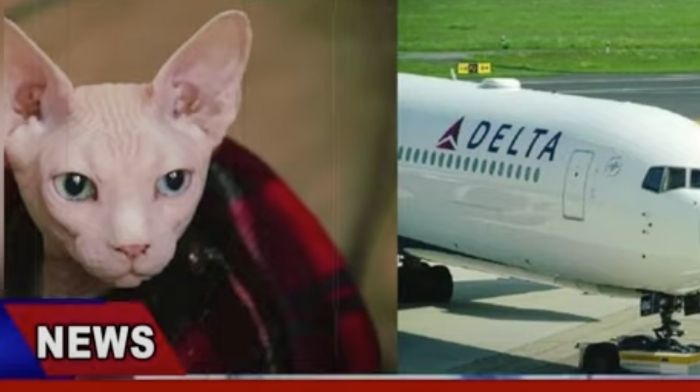 A truly shocking incident took place on a Delta Airlines flight from Syracuse to Atlanta when a woman began breastfeeding a hairless cat, much to the horror of the other passengers and crew members.

Fox Business reported that a flight attendant used the Aircraft Communications Addressing and Reporting System (ACARS) to let Delta officials on the ground know that the person sitting in seat “13A is breastfeeding a cat and will not put cat back in its carrier when [flight attendant] requested.”

The flight attendant went on to ask that Delta’s “Red Coat” team, which is a special group dubbed “customer service experts” by the airline, be at the gate in Atlanta to greet the woman upon landing.

Someone just texted me this… what the actual hell? pic.twitter.com/B0ri97fh2D

The flight attendant, who has since been identified as Ainsley Elizabeth, later took to social media to reveal more details about what went down.

“This is just so crazy,” she said, according to Snopes. “This woman had like one of those hairless cats swaddled up so it would look like a baby. And her shirt was up, and she was trying to get her cat to latch, and she wouldn’t put the cat back in the carrier and the cat was screaming for her life… you know those little butter packets you get when they don’t have olive oil… she put the butter (motioning to her nipple) yeah.”

The incident reportedly took place on November 13, but it was only just revealed to the public this week.

@christmasxgoddess I think that’s enough internet for today. hats off to you @ainsleytheaviator

“Delta fully supports a woman’s right to breastfeed on board Delta and Delta Connection aircraft and in Delta facilities,” Delta said. “Breast pumps are allowed on board. At the airport and if you prefer, many airports do offer private lactation rooms or spaces.”

Small dogs, cats and household birds are allowed by Delta to board domestic flights and “must be able to fit in a small, ventilated pet carrier.”

Just when we thought we’d seen it all, something like this happens that nobody could ever see coming! That was certainly a flight that nobody who was onboard it will ever forget.