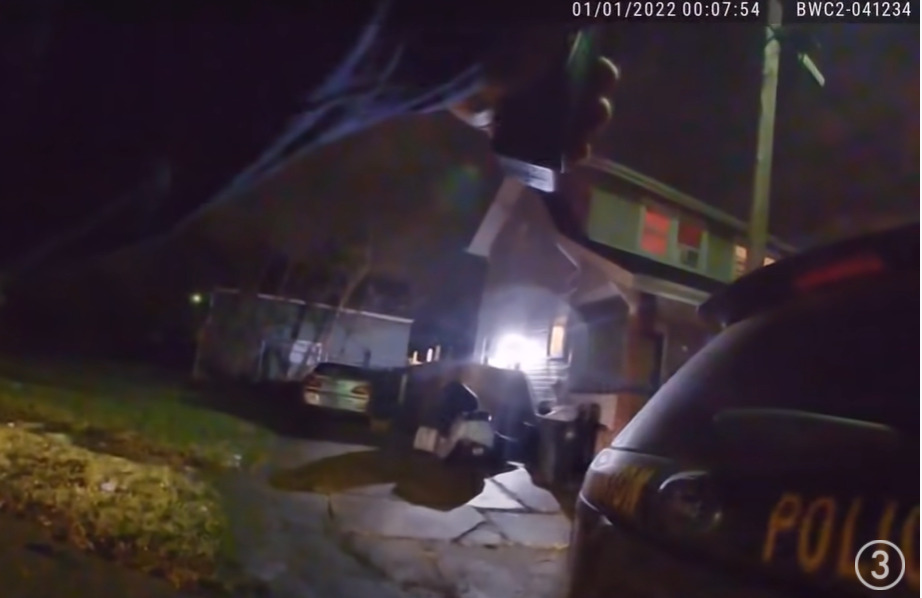 CANTON, OH – An incident allegedly involving New Year’s Eve “celebratory gunfire led to a fatal shooting of a 46-year-old man shortly after the new year was rung in. An officer apparently happened to be right next to the property where the shots rang out.

Reports have identified the decedent as 46-year-old James Williams, whose wife claimed that he was shooting firing rifle rounds into the air to celebrate the ushering in of the new year.

Officials released bodycam footage from the incident that occurred outside of the home located in the 2300 block of 10th Street Southwest, where the unnamed officer can be heard communicating over the radio about his location and responding to reported gunfire when suddenly over 40 shots started going off behind a six-foot fence near where the officer was standing.

The officer draws his duty weapon and fires an undecipherable number of times through the fence where the gunfire was coming from, as with the cacophony of originating gunfire makes it difficult to discern how many times the officer fired in response.

After the gunfire from the deceaced stopped, the officer announced himself as an officer and started directing the other occupants inside of the home to exit the residence. While clearing the home, officers found Williams having suffered gunshot wounds to the chest, and he was later declared deceased after being transported to an area hospital.

A press release from the Canton Police Department noted that in the moment when the officer fired through the fence, it was out of fear for his personal safety.

“The officer, who was outside of his vehicle, confronted a subject that began shooting a firearm. The officer, in fear for his safety, fired his duty weapon at the subject and struck him.”

Attorney General Dave Yost noted that the optics of the bodycam footage aren’t exactly great, but that an investigation needs to be conducted before public condemnation sweeps into action.

“As much as I can say that video is not a very good looking piece of video,” Yost said, “we have to do all of the investigation. We have to find all the facts before we come to a conclusion. I urge everybody in the public, let us do our work.”

The Ohio Bureau of Criminal Investigation is taking the lead on the investigation.