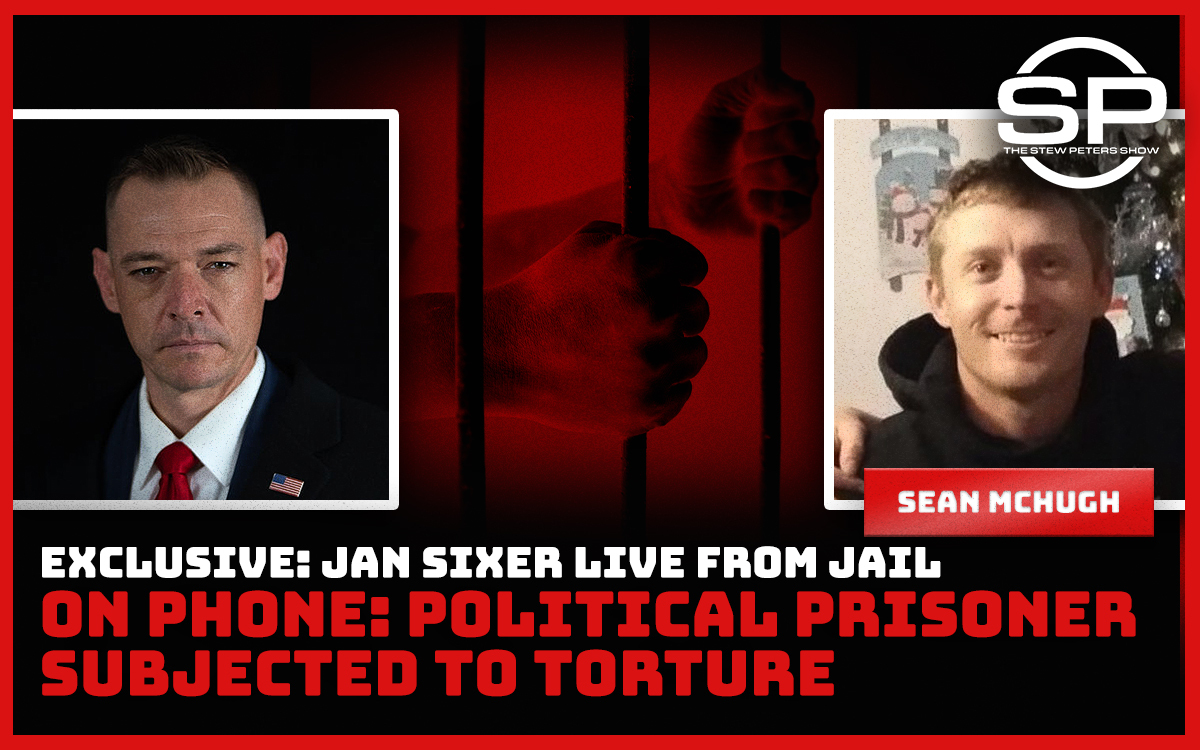 We have a very special guest today. We have one of America’s very own political prisoners, calling in directly from the Washington D.C. gulag.

Sean McHugh traveled from California to Washington D.C. to support his president. On January 6, he literally never set foot in the Capitol. He only demonstrated outside, against what he thinks was a stolen election. The worst thing McHugh allegedly did is spray a can of bear spray in the direction of some police officers. For that, he’s been hit with ten separate federal charges. He faces up to twenty years in prison if convicted.

To the feds, Sean McHugh is even worse than that.

The federal government’s case against McHugh is egregious. In a recent court filing, the feds say that McHugh belongs in prison because he used a megaphone to shout at the police. They accuse him of being the “de facto leader” of the group storming the Capitol because he chanted “Whose House, our House” outside of the Capitol, which is in fact “our house,” by the way. They say he caused the Capitol break in because he said, and this is a verbatim quote, “‘C’mon you guys, bring it, let’s go.”

The authorities are even using McHugh’s travel plans against him. They say that since he arrived in D.C. on January 5th, and left on January 7th, that somehow proves that he was only present in D.C. to try to overthrow the government. It couldn’t be that he simply arrived to attend a one-day demonstration, and then planned to go home when it was over. Shouting at the police is legal in America, or rather, it was, until the age of Joe Biden and Antifa. Now, you can loot stores, set them on fire, and cause all manner of mayhem in the streets of America, and get away with it. The press will say that you were “protesting against racism.” But if you show up at your nation’s capital to demonstrate publicly against an election you believe was stolen, then you will be dragged off to prison.

But authorities didn’t just hit McHugh with grossly inflated charges. They want to make sure they destroy his life completely, even if he’s acquitted. So a Washington judge has ordered that McHugh be held in custody as a threat to the public until his trial is resolved.

Prior to his arrest, McHugh had a successful construction business that he was in the process of expanding. Now, he’s been ripped away from any means of supporting himself. He’s been taken away from his teenaged son as well. Instead, he’s sat in D.C., rotting in a jail cell. He’s spent more than 200 days behind bars, without real due process. Behind bars, he’s had to endure racist guards, mistreatment, de facto torture, denial of constitutional rights, and more.

That’s what the point of all this is. They don’t think McHugh is some kind of serious threat. McHugh was only arrested four months after January 6, and in that time he had done nothing. He clearly wasn’t a flight risk and isn’t some kind of threat to public safety. None of the people in the January 6 gulag are. They are political prisoners. They are being held for ideological crimes, not simply to punish them but to intimidate anybody else who might think to stand up to the Biden regime.

But thankfully, even the Biden junta isn’t able to deny McHugh the right to communicate with the outside world. We recently spoke with him on the phone via his attorney.