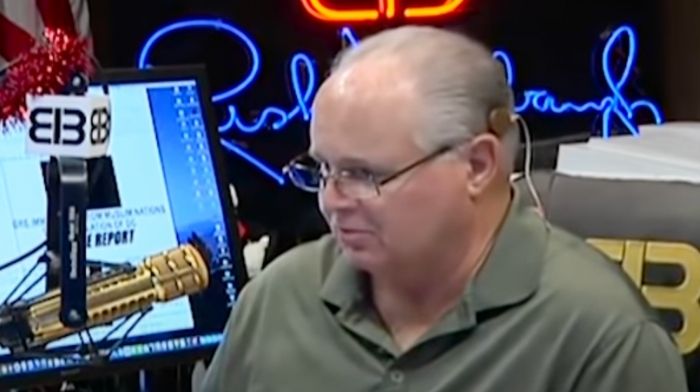 As Americans everywhere are celebrating Thanksgiving and giving thanks not only for their families but also for everything this great country has to offer, a clip has surfaced from 2015 in which the legendary Rush Limbaugh details what he describes as “the true story of Thanksgiving.”

All fans of Limbaugh, who tragically passed away last year, know that he had a longstanding tradition of telling “the true story of Thanksgiving,” going all the way back to his 1992 book, “See, I Told You So.” Limbaugh firmly believed that of the Pilgrims had been misconstrued over the years and that the true story of their success is really about them rejecting Socialism to become a settlement that thrived and laid the groundwork for our great nation.

“The story of the Pilgrims begins in the early part of the seventeenth century… The Church of England under King James I was persecuting anyone and everyone who did not recognize its absolute civil and spiritual authority,” Limbaugh said. “Those who challenged ecclesiastical authority and those who believed strongly in freedom of worship were hunted down, imprisoned, and sometimes executed for their beliefs.”

Limbaugh then said that a group of separatists fled to Holland for a few years before they “agreed to make a perilous journey to the New World, where they would certainly face hardships, but could live and worship God according to the dictates of their own consciences.”

“On August 1, 1620, the Mayflower set sail,” Limbaugh continued. “It carried a total of 102 passengers, including forty Pilgrims led by William Bradford. On the journey, Bradford set up an agreement, a contract, that established just and equal laws for all members of the new community, irrespective of their religious beliefs. Where did the revolutionary ideas expressed in the Mayflower Compact come from? From the Bible.  The Pilgrims were a people completely steeped in the lessons of the Old and New Testaments.”

After a long and arduous journey, “when the Pilgrims landed in New England in November, they found, according to Bradford’s detailed journal, a cold, barren, desolate wilderness. There were no friends to greet them, he wrote. There were no houses to shelter them. There were no inns where they could refresh themselves. And the sacrifice they had made for freedom was just beginning.”

“During the first winter, half the Pilgrims — including Bradford’s own wife — died of either starvation, sickness or exposure,” Limbaugh recounted. “When spring finally came, Indians taught the settlers how to plant corn, fish for cod and skin beavers for coats. Life improved for the Pilgrims, but they did not yet prosper!  This is important to understand because this is where modern American history lessons often end.”

Limbaugh then revealed “the part that has been omitted” from the history books.

“The original contract the Pilgrims had entered into with their merchant-sponsors in London [that] called for everything they produced to go into a common store, and each member of the community was entitled to one common share,” he explained. Merchant-sponsors are the ones who sponsored the Pilgrims’ journey, since they didn’t have the money to fund it themselves.

Limbaugh credited Bradford with figuring out that this was not going to work.

“Bradford, who had become the new governor of the colony, recognized that this form of collectivism was as costly and destructive to the Pilgrims as that first harsh winter, which had taken so many lives,” Limbaugh continued. “He decided to take bold action. Bradford assigned a plot of land to each family to work and manage, and whatever they produced was theirs.”

“What Bradford and his community found was that the most creative and industrious people had no incentive to work any harder than anyone else, unless they could utilize the power of personal motivation!” he added.

Limbaugh believed that the true story of Thanksgiving was not about giving thanks to Indians for helping the Pilgrims. Instead, it was about the Pilgrims figuring out just how bad Socialism is.